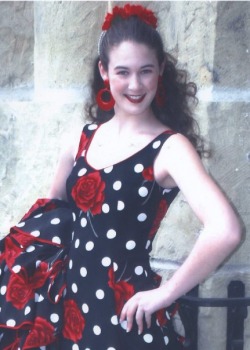 Born in Santa Barbara, CA, Claire grew up dancing ballet, modern, and Spanish flamenco, performing in many of Santa Barbara's theaters and festivals, including Old Spanish Days Fiesta. Her passion for writing and the arts led her to attend the University of California at Berkeley where she majored in English and Dance & Performance Studies, and spent her senior year studying abroad in Granada, Spain. There, she was enrolled as a full time student at the Universidad de Granada, studying European art history and Spanish theater. She also continued her studies in flamenco dance, taking classes in the caves of the Sacromonte, Granada's old gypsy quarter. She is a graduate of the Master's program in Specialized Journalism (The Arts) at the University of Southern California's Annenberg School for Communication & Journalism, where she wrote her thesis on flamenco music and dance, titled "Flamenco Nuevo: Tradition and Innovation."

Claire has written about the arts for several publications, including the Santa Barbara News-Press, the Santa Barbara Independent, and Patch.com. While at USC, she was a staff writer at Neon Tommy, Annenberg Digital News' student-run online publication, and continued to serve as a correspondent for the News-Press from Los Angeles. She has written previews, reviews, and features on some of the world's best dance companies, including Alvin Ailey American Dance Theater, Joffrey Ballet, Pilobolus Dance Theater, Bolshoi Ballet, Hubbard Street Dance Chicago, Ballet Preljocaj, and more. She also writes film and theater previews and reviews and fine arts features.

Claire was named a 2010 fellow at the National Endowment for the Arts/Arts Journalism Institute for Dance Criticism held at the American Dance Festival on the Duke University campus. During the fellowship, under the direction of dance critic and historian Suzanne Carbonneau, Claire participated in writing workshops with New York Times dance critic Roslyn Sulcas and Village Voice dance critic Deborah Jowitt, attended performances and movement workshops, and met with dance professionals, including choreographers, dancers, funders, presenters, artistic directors, and managers.

In the summer of 2010, Claire developed the first blog for the Music Center, Los Angeles' premier performing arts complex, working with the Center's Marketing Coordinator to cross-promote the site on social media websites such as Facebook and Twitter. Initial posts were centered on the last Los Angeles appearance of the Merce Cunningham Dance Company before its dissolution in December 2011.